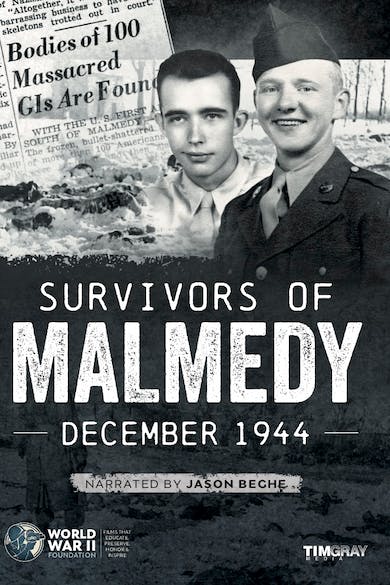 Narrated by the star of NBC’s Chicago P.D. Jason Beghe.

Narrated by the star of NBC’s Chicago P.D. Jason Beghe.

Survivors of Malmedy: December 1944 tells the story of the World War II massacre of 84 American soldiers in the Malmedy, Belgium area on December 17, 1944, during the opening days of the famous “Battle of the Bulge.”

On December 17, 1944, after a short battle, 150 American GI’s were taken prisoner just outside the Belgian town of Malmedy and herded into a field by an infamous German SS division led by one of the Nazi’s most brutal commanders. The unarmed American POWs were gunned down. It was the largest single massacre of American troops in WWII.

Those still alive after the initial shooting in the brutal cold were killed by SS soldiers ordered into the field to execute any Americans still breathing. Some American soldiers played dead. Some ran. Some escaped to nearby houses. In the end, more than 50 Americans did escape the infamous Malmedy Massacre. Today just a handful remain.