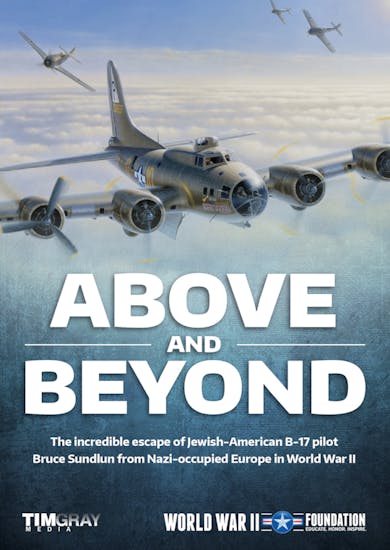 Above and Beyond: The Incredible Escape of Jewish-American B-17 Pilot Bruce Sundlun from Nazi-Occupied Europe in World War II.

During overseas active duty beginning in June 1943 Bruce Sundlun, a Jewish-American college student, served as a B-17 Flying Fortress pilot in the England-based 384th Bomb Group of the Eighth Air Force at Grafton-Underwood Air Base.

Sundlun’s plane, the Damn Yankee, was shot down over Nazi-occupied Jabbeke, Belgium on 1 December 1943 after being damaged by flak and attacked by German fighter planes following the bombing of Solingen, Germany, on the “Yankee’s” 13th mission over Europe. Five of his crew were killed, four others captured by the Germans.

After being smuggled out of Belgium on more than 100 stolen bicycles and hidden by Catholic priests and after six months time cooperating with the French Resistance under the code name Salamander, Bruce Sundlun made several attempts to enter neutral Spain in an effort to escape back to England. However, after deciding that there was too much danger of capture or loss in the snowy Pyrenees, Sundlun made his way, once again on stolen bicycles, north-eastward across France where he finally escaped into Switzerland.

Before escaping into Switzerland, Sundlun had once again engaged with the Maquis (French Resistance) in acts of sabotage against German Army units.

On entering neutral Switzerland, Bruce Sundlun was recruited by Allen Dulles working out of the U.S. Embassy in Bern to reenter France under the auspices of the Office of Strategic Services (OSS) to act as a spy and bombardment spotter for the Allied invasion of Marseilles (Southern France) in August 1944.

Following WWII, Bruce Sundlun became a very successful businessman, advisor to presidents and the 71st governor of the State of Rhode Island.

Above and Beyond is Bruce Sundlun’s amazing escape from occupied Europe in World War II, filmed on location in Belgium and narrated by Sundlun’s own daughter, Kara, who travelled back to the village of Jabbeke in Belgium, to re-trace her father’s footsteps in World War II.